During one of the monsoon evenings in Bandipur, the safari van came to a grinding halt! Shuffling feet reached the window by the door and a camera shutter went into overdrive. Sitting in the same side as the door, I cranked my neck and looked down to see what had caught the photographer’s sudden attention. A stripe-necked mongoose stood beside a puddle of water.

The mongoose then entered the puddle and walked all around disturbing the waters. What was this behavior, I wondered? Moments later, my questions were answered. The mongoose in a flash, darted towards one end of the puddle and came out with a snake in its jaws! The snake was ripped and devoured in no time. After the mongoose was done with the snack, it repeated the hunt, only to have run out of prey.

Having only heard of age old stories of the rivalry and battles of mongoose and snakes, it was one of those super exciting moments that one experiences with lesser mammals. Nature and wildlife doesn’t fail to leave you spellbound with such uncommon occurrences.

Leopard on a Tree is every photographer’s dream shot. And I am no different. Harbouring the dream for a long time, I spend every drive scanning trees hoping to spot a leopard.

Friday, 19th June 2009: I had taken family friends for an evening safari into Bandipur courtesy ‘Tusker Trails’. After a futile weekend at Kabini looking for the spotted cat, I prayed to all possible gods who might convey my prayers to the wild cats as we entered Bandipur. In the beginning of the second half of the safari, I jumped off my seat almost yelling leopard but held back wondering if I was hallucinating! The teak tree had unususal spots and a tail hanging down a branch.

The driver had gone about 100 feet ahead from the actual spot. As we reversed the vehicle and stopped, the leopard was aware of our presence. Unfortunately for me, the driver parked the vehicle in such an angle that there was a tree on the right side blocking the full view. I zoomed to 400mm and started shooting. The cat was already on the move and stopped for a sec or two looking at us through the leaves. That’s when I managed this. In a flash it came down the tree and disappeared into the bushes. The action lasted only a few seconds. I quickly went through my pics and was disappointed with the results from this long time dream sighting. Except this picture. It was exactly what I had wanted – Leopard on a tree, looking directly at us through the gaps of the leaves completely camouflaged. Spotting this cat on trees and behind all that camouflage is very difficult and I take pride in the fact that I spotted it first!

What happened in the next few minutes is something I never expected or even dreamt off! That is for part two of the series. Stay tuned.

As we entered Bandipur for the evening safari,  I asked Adil what he thought he might see on his maiden safari. “We are going to see a tiger” came a confident reply. Having done enough drives without a wild cat sighting, I thought to myself “yeah…like we are actually going to see one”. It was a “normal” drive. We saw the chital (spotted deer), Indian peafowls, elephants. As we were going down a slope near the reserve, I heard an excited yell TIGER! TIGER!

I saw Vishnu Anna jump off his seat and rush toward the driver asking him to stop the vehicle. I looked in the direction he pointed and scanned every inch for the tiger. There she was! Sitting in a clear patch of green grass at a distance of about a hundred meters. Stray bamboo branches made it very difficult for the camera to focus on the tiger. Low light conditions didn’t help either. After five minutes, she lay flat and flipped over to the left. Then she got up and disappeared behind lantana bushes. We tried hard and spotted her again behind thick foliage. Waited for half an hour for her to come out in the open and then left.

The mere sighting gave me a high. For many it was their first tiger sighting. For me the first capture on camera. It had been a long time desire to photograph a tiger. Thrilled? Yes! Because the first shot was due for 4 long years! Satisfied? No! But I knew this is just the beginning of many more tigers to see! 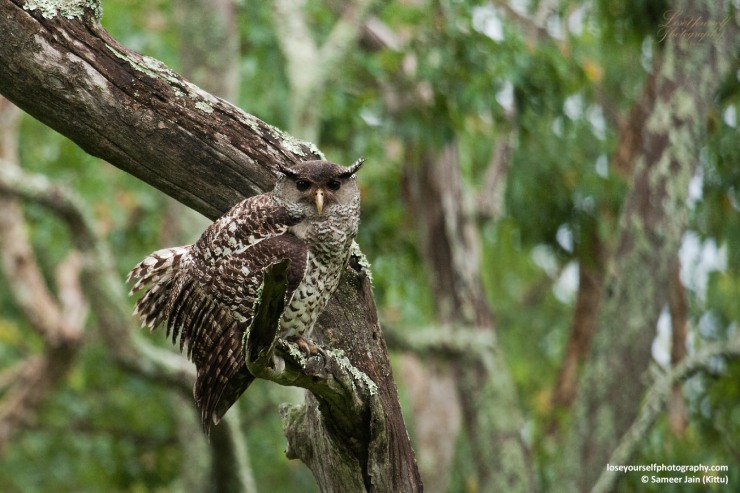 I would have been kicking myself if I hadn’t gotten off the car and taken the camera out from the trunk (I was driving with four other friends…so no camera in hand). I spotted the owl off the main road in the Mudumalai Tiger Reserve. The first thing that came to my mind was the picture of a Forest Eagle-owl, photographed in BR Hills by Dr. Ajit Huilgol. Unsure if the owl I clicked was the same, I came back home and referred his picture against mine. It was the Forest Eagle-owl indeed! I was thrilled. This still remains as one of the most special wildlife and birding moments!

A lot happens in the deep reaches of the Bandipur Tiger Reserve. The food chain doesn’t stop functioning just because we fail to be around to witness it. 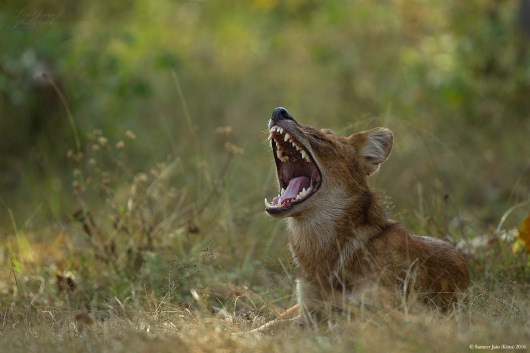 In an evening safari, we crossed paths with two dholes (wild dogs) in one of the sections of the jungle. Lazing around on the grass and in a playful mood. Moving around at their own pace and one of them appeared bored yawning his afternoon away.

The other one appeared a little restless. Pacing along the trail and a little alert. Not sure of which direction to head to in this lazy afternoon. 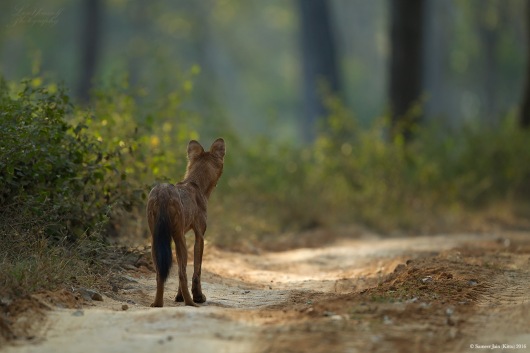 But as time passed, he became alert to the surrounding. With his ears perked up, he paid more attention to the sounds and not to mention their sensitive olfactory senses. Before we knew, he was off on his way into the bushes and the other one followed his lead unquestioningly.

The playful sense about them had disappeared. It took us a while to realise that they were off on a hunt.

…And we lost them. Way off the trail, deep into the foliage where our senses failed to track them. A while later, as we were doing the rounds of the rest of the jungle looking for wildlife, we get a call from somebody in the forest patrol team. We rush to the site only to see what the dholes who deceptively appeared laid back until they disappeared in the foliage cover.

The dholes had moved away from the kill when we reached the spot. After waiting for about 15-20 minutes they came back to feed on the kill.

Though we missed the hunt, we were fortunate to witness this endangered species feeding on the fresh kill. Taken late evening in fading light with an ISO of 10000 or more.