Mosquitos were feasting on me as I waited in the birding hide for the brown-cheeked fulvetta. A number of these skittish birds were occasional visitors. The drying river bed few metres away from the hide worked in my favour. Evening sessions which were usually non-productive started attracting birds due to water availability at the bird bath.

Few fulvettas appeared cautiously, took a dip in the bath and left. A white-rumped shama would disappear somewhere behind, only to perch on a stump few minutes later and dry itself. An old bird bath that was removed and left behind the perches had collected water and was hosting birds! Must bring that bird bath to the front, I made a  mental note.

And then in a flash, a bird appeared…yellow beak like a curving sword and the unmistakable colors! One of the shyest birds, and a skulker; Indian Scimitar Babbler had made a quiet entry. The presence of this babbler is known by the continuous calls but always stays hidden behind thick foliage. 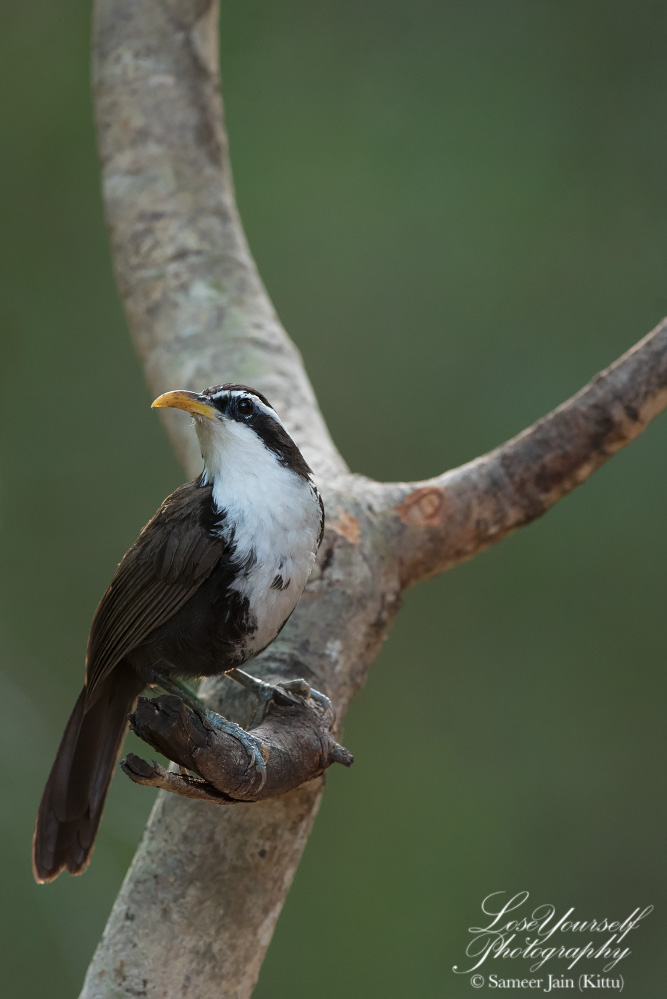 Hopping down from the tallest stump, it disappeared into the old bird bath. All I could see was splashes of water and I hoped for it to sit out in the open to dry itself. A painful wait ended with the babbler sitting on every perch at the hide and finally settling for a branch on a tree nearby.

Ignoring the sound of the shutter, the scimitar babbler calmly dried itself while I made some images. Once done, the babbler made a quick exit, leaving me with a wide smile. A quick review of the images left me smiling wider. I finally had pictures of the skulker.

Way before I started photography, I heard the song Lose Yourself by Eminem, and the starting line has stuck with me ever since. It goes- “If you had one shot, one opportunity to seize everything you ever wanted would you capture it or just let it slip?” This line is a constant reminder and the closest description of what I feel when I’m out on a safari or walking/trekking photographing birds. Fondly known as Kittu, I’ve been a resident of Mudumalai for three decades. I manage and run Forest Hills Farm and Guesthouse; a family run resort near the Mudumalai Tiger Reserve. For as long as my memory goes, I have been an ardent lover of wildlife. Growing up on tea estates and Forest Hills, has played an active role in nurturing my love for nature and wildlife. During school holidays at Forest Hills, I made full use of safari and trekking opportunities that came my way. In 2005, I decided to pursue photography with a Canon film SLR and in 2007, I went digital. The love of wildlife has taken me to various national parks both in India (Bandhavgarh, Ranthambore, Tadoba, Kaziranga to name a few) and other esteemed forest reserves such as Masai Mara (Kenya). While I keenly keep a track of birding activity at home (Forest Hills Farm and Guesthouse), one might just bump into me during a safari at my favourite forest reserve i.e. the Bandipur Tiger Reserve. View all posts by Sameer Jain (Kittu)

This site uses Akismet to reduce spam. Learn how your comment data is processed.